Produce Solar Videos Like a Pro – Part 1, Filming a Testimonial Most of us in the solar business know that referrals are the #1 lead source for solar contractors. And happy customer testimonials on your website are a fantastic way to engage prospects in that “consideration” stage. So what are you waiting for? If you have a smartphone in your pocket, you can start producing simple, good-looking testimonials right away. Here are some tips to get you started.

Cameras – These days, most smartphones can shoot excellent HD video, so there’s no shame in using your phone. (Even some big indie films have been filmed on the iPhone.) But there are a few reasons to get a dedicated video camera or a DSLR. These include: interchangeable lenses, dedicated audio inputs and audio controls, ultra-high-resolution photos, long battery life, and more. Spend what feels right, what you’ll grow in to, and don’t worry about the rest.

Note: these cameras are just suggestions. There are tons of great cameras out there. It’s hard to go wrong these days. The Phone in your Pocket $

You’ve already got it, so why not use it? With a 18-105mm lens (wide and zoom), this is an excellent way to get great-looking video and still images. Includes mic inputs. You can also experiment with other lenses. Tripods – You’re going to want to put your camera on a tripod so you can conduct interviews and not have to hold the camera. This will also make your footage look more “professional”, solid, and easier to edit. If you’re using a smartphone to shoot with, make sure and get the proper smartphone mount for the tripod. (See below, under “Accessories.”) Audio – We’ll get into this a bit more, but good quality audio is imperative. If you don’t spend money on anything else, spend some dough on an external microphone. Even the wired lavalier (1st on the list, $69) is a huge step up from your camera’s internal microphone. A cheap way to get decent audio. Attach the mic to your speaker’s lapel and plug it into your iPhone or camera. Away you go! A must have. Pick from any of these on-camera mics. You can also attach these to a tripod to get them closer to your speaker. (But don’t forget the extra 1/8″ cable extension.) 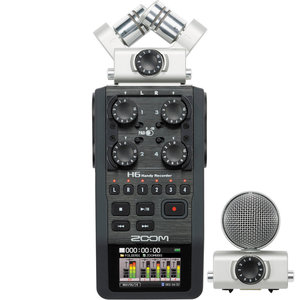 This unit captures high-quality audio to SD cards. Because you’re not tethered to the camera, you can place the unit whereever you need it. Also great for field recordings. One of the best mics you can buy. You’ll need an XLR cable and an external audio recorder, or a camera with XLR conncections.

Accessories – We’ll cover some of this below, but these are some accessories you might want to add to your gear bag.

If you’re using a smartphone to shoot with, make sure to get the proper tripod mount. (3rd on right.) Throwing a little light on your subject can make a huge difference. When you watch a Hollywood film, you can always see a little glint of light in an actor’s eye. This is intentional. You can put one of these small, battery-powered LED lights on a tripod and do the same. This will let you mount your phone on a tripod. Essential.

Things can get hairy quickly when you’re filming for the first time, so do some practice runs before you head out into the field. Make sure you know how to connect everything, that you’re getting the audio you want, and that you know what happens when you hit “record.” Some other things to consider:

Here are two filmmaking basics that can boost your production’s audio and look tremendously, right off the bat.

I would argue that audio is the most critical part of any video. This might seem unintuitive, but if the audience can’t hear what your talent is saying, or has to strain through lots of wind noise to understand what’s going on, they’ll hit ‘stop’ on even the highest quality HD video.

The human voice is captured best at close range, so try to put your microphone as close to the speaker as possible. If you have a lavalier microphone, clip it to the talent’s lapel or shirt. (If you’re uncomfortable clipping it yourself, just ask the person to attach it somewhere on their shirt front.) If you have a video mic, mount it on an extra tripod or Gorillapod, and place it as close to the talent as you can, just out of camera frame.

Check your audio level. There’s nothing worse than distorted or inaudible audio. Figure out how where your audio input adjustments are on your camera and adjust the audio level input appropriately. Many cameras and cell phones have an auto setting for audio inputs. Try it out, but don’t rely on it. Figure out how to adjust the input levels yourself.

Outdoors: Try to position your talent in the shade, facing the sun. The shade provides an even, soft light and reduces shadows under the talent’s eyes. Having the sun in front of the talent reduces backlighting and helps your camera expose the scene appropriately, even on the “auto” setting.

If you’re on a rooftop, and unable to get out of the sun, you can invest in a diffuser (see “accessories”, above), and have an assistant hold it between the talent and the sun. Here is a brief explainer on the concept.

Indoors: Battery-powered LED lights are cheap and great for indoor settings. (See suggested ring light above.) You don’t need much light—even one light is okay to start with. (A simple halogen work light can do wonders if placed correctly.) There are lots of explainers online on “three-point lighting” setups, so check those out if you’re interested. Otherwise, just play around with the lighting and learn as you go.

First, find a happy customer and ask them if they’d be willing to sit for an interview. (Don’t forget to bring a release form for them to sign for their image and location.)

A place to film

If there is a safe spot to position your customer next to their system, great. If not, try to film with the array behind them. If you’re filming inside, or offsite, you can also intercut b-roll (extra footage) of their installation during the editing process. (We’ll cover b-roll in Part 2 of this series.)

I’ve found the most important thing is to try to keep things casual. Try to make the person comfortable and keep the interview conversational. Most people have never been on camera before, and they will be nervous! Let them know that you’ll “just ask a few questions and I can edit out the mess ups later.” If they stumble over what they want to say, tell them not to worry, and keep the conversation moving. You can always ask them the question again later, and you don’t want them to get hung up on their “performance.”

Tip: The best interview material comes out when people are having fun.

Tip: Don’t film for too long. When I was first starting out, I asked waaay too many questions. You don’t want to tire your talent out, and you don’t want a ton of footage to go through during the editing process.

I would recommend starting with just three questions. (But have a few extras in your back pocket if the person is excellent on camera.) Most likely, if they’re not great on camera at the beginning, they’re not going to improve. In those cases, it’s better to ask a few questions, see what you get, and call it a day.

Asking people how they feel about something usually elicits more emotional, thoughtful, and open-ended answers, as opposed to more direct, yes or no questions. For example, picture being outside a customer’s home, looking up at their new PV system. You ask them: “So you woke up today with a new solar installation on your roof! How do you feel about it?”  That will probably elicit a better answer than, “Do you like your new install?” Or, “Tell me about the process of getting solar put on your house.” Boring, right? Give people questions they’ll be excited to answer.

And throw out some questions that might lead to interesting answers. Even if you don’t use them in the testimonial, you might use the material later, in another video.

Interview timing – present and past

Present: Try filming your first testimonial the day after the install is complete. The customer will be excited about their new system and ready to talk about the great company that put it on their roof. They’ll also be used to having you around and the process will be fresh in their mind.